PIC: Ask an engineer how a combined sewer works. Here's what you get. 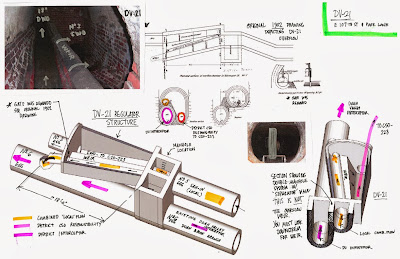 "It's a little messy around the edges," Joe said, referring to his sketch of a combined sewer regulator. I would have described it as intricate, then again, I'm not Joe.

Joe Jira is a Geographic Information System Analyst in our Engineering department, and Analyst doesn't give his enthusiasm for his work justice.

I recently saw his sketch when he offered coworkers a demonstration of our GIS technology and how he uses Google SketchUp to create diagrams of our infrastructure. The "sketch" above is his way of explaining the flow of a combined sewer in Cleveland under E. 107th and Park Lane.

Basically, a combined sewer carries sewage and stormwater in the same pipe. In most conditions, it all flows to a treatment plant, but in heavy storms, some of the flow may be released to the environment to prevent flooding and backups.

Joe's diagram shows how that happens, and sow does this one-minute video.