Wired recently ran a great story about the water bear, scientifically known as the tardigrade, a creature found all around the world under our feet. Why are these little guys so interesting? A biologist puts it pretty bluntly.


“They are probably the most extreme survivors that we know of among animals,” said biologist Bob Goldstein of the University of North Carolina at Chapel Hill. “People talk about cockroaches surviving anything. I think long after the cockroaches would be killed we’d still have dried water bears that could be rehydrated and be alive.”

Yes, rehydrated. So they're not really dead-brought-back-to-life, but more like living in a state of almost suspended animation called cryptobiosis.

We have a fondness for this little guy ourselves as we find him quite often in our wastewater analysis. Water bears indicate the age of sludge—the solid biological material collected during the wastewater treatment process. He's one of many creepy-crawlies we find that help us know if we are doing our jobs. 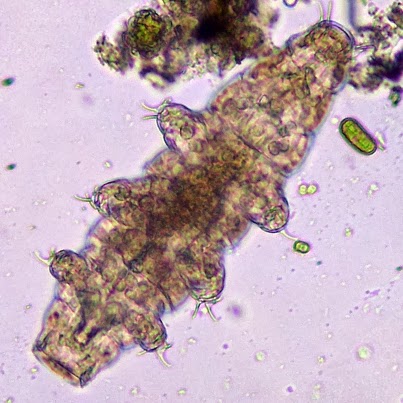 Posted by Northeast Ohio Regional Sewer District at 10:48 AM