BY THE NUMBERS: Mackenzie's a machine that's anything but boring

Mackenzie is the name of the huge tunnel digger that will burrow the route of the Euclid Creek Tunnel, a major piece of our Project Clean Lake efforts. Here are some of the stats about the project and the equipment.

About the Euclid Creek Tunnel


The Euclid Creek Tunnel is a $197 million project that will capture combined sewage (a mixture of wastewater and stormwater) and store it until it can be pumped out and treated at the Easterly Wastewater Treatment Plant. The Euclid Creek Tunnel—located approximately 200 feet below ground—will be 24 feet in diameter and nearly three miles long when complete. It will hold 52 million gallons of combined sewage at a time.

What is the purpose of the tunnel boring machine?


A tunnel boring machine, or TBM, cuts through rock. This is the piece of equipment used to excavate the 18,000-foot long tunnel. This TBM is “single pass,” which means that after it cuts through the bedrock, it also places lining segments into place so that the tunnel is fully lined and watertight. It will cut a path 27 feet in diameter and, when the lining segments are in place and grouted, the finished diameter of the tunnel will be 24 feet.


The TBM’s cutterhead weighs 345,000 pounds. It is comprised of 52 tungsten carbide steel disks, each weighing 260 pounds and measuring 17 inches in diameter. The diameter of the cutterhead is 27 feet.


How will the TBM make its way underground? How will it be removed?


The tunnel boring machine will be lowered via crane into Shaft 1 at the primary construction site in Bratenahl. The TBM will be lowered in and assembled in sections underground.   Then, once the tunnel is completed, it will be extracted from Shaft 5, which is located at intersection of St. Clair Avenue and East 185th Street in Cleveland.

Several other portions of the TBM have already been lowered into Shaft 1, including the drive shaft which weighs 340,000 pounds.

How long will it take to excavate the tunnel?


The current project schedule indicates tunnel excavation and lining installation is to occur from August 2012 to October 2013. Mackenzie will run 16 hours each day (two shifts) and excavate between 50-75 feet during that time. The third shift is dedicated to maintenance on the TBM.

Where was the TBM built? 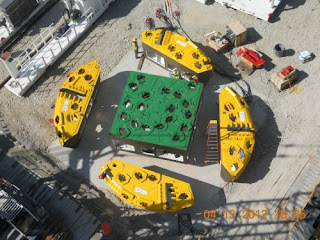 How did the tunnel boring machine get to Northeast Ohio?


This machine has traveled a long way to get to Greater Cleveland.  Following testing in China, the TBM was partially disassembled and shipped from China. It passed through the Panama Canal and arrived in the United States in Philadelphia, Pennsylvania. From there, the TBM traveled by truck to Cleveland.

How much does the machine weigh?

The TBM is 300 feet long and measures 27 feet in diameter. This is the second-largest TBM in the country. To put it into perspective, the machine, once assembled, will weigh about the same as 500 female elephants.

Why is the tunnel boring machine named “Mackenzie”? 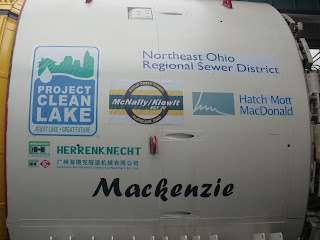 Tunnel boring machines are traditionally given a female name when they are manufactured; Mackenzie is the name of the daughter of a McNally-Kiewit employee.  McNally-Kiewit is the contractor for the Euclid Creek Tunnel project.

How do I learn more?

Posted by Northeast Ohio Regional Sewer District at 11:43 AM