ARCHIVES: A photograph that changed everything 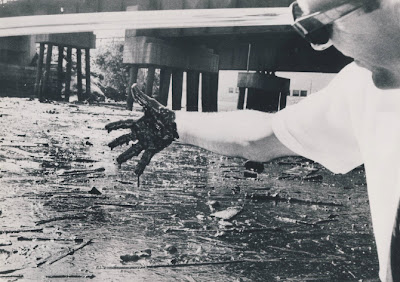 Like rummaging through family photos from a dusty hatbox in the attic, finding a photo in our Sewer District archives can have amazing emotional impacts.

We found this one today.

This undated Cleveland Plain Dealer photo by Marv Greebe was taken sometime in the 1960s, showing former PD reporter Richard Ellers on a trip along the (to put it mildly) polluted Cuyahoga River. cleveland.com ran a story about the photo and the river's condition back in 2009 that puts some perspective on the image and its' impact on the environmental movement.

One line in the story stands out:


The image of a black, gooey hand coming out of the Cuyahoga like a B-movie swamp monster defined the plight of the Cuyahoga. By association, it indicted all industrial American cities -- and a culture that for a century had generally viewed natural waterways as a means to an end.

It was no wonder a river would burn under conditions like this. The photograph inspired much greater media attention and led to even greater environmental awareness in the late 1960s and early 1970s—the same time the Regional Sewer District was created.

To think this photo was taken more than 40 years ago helps us appreciate how far we've come. And current challenges help us understand how far we have yet to go.
Posted by Northeast Ohio Regional Sewer District at 10:33 AM