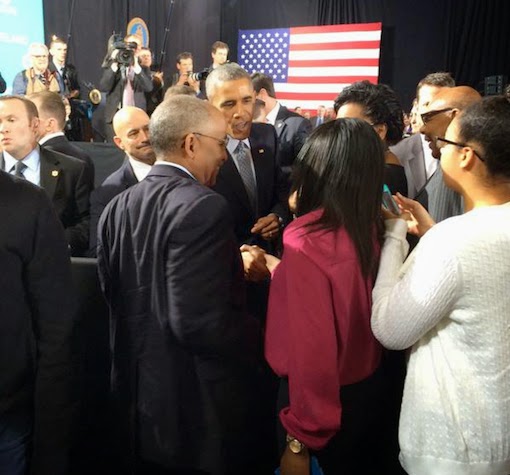 President Barack Obama addressed a crowd of 500 guests at the Global Center for Health and Innovation yesterday, focusing his remarks on the federal budget, middle-class economics and manufacturing opportunities.

But both infrastructure and environmental regulation made it into the President's comments as he welcomed questions from the audience after his speech.

"What has surprised me," said President Obama, when asked what has surprised him most since beginning his first term, "even though I had served in the Senate, was the continued difficulties in Congress getting stuff done that shouldn’t be controversial." He continued:


There are some issues that I knew would be controversial. I mean, we know that if there’s a debate in Congress about abortion, that’s going to be controversial.  There are strong-held views on each side. They’re hard to reconcile. We understand that. And that’s part of democracy and it never gets perfectly resolved.

But I have been pushing for us to fund infrastructure since I came into office, because we’ve got $2 trillion worth of dilapidated roads, bridges, sewer lines, and then there’s a whole new infrastructure that we have to build in terms of a smart grid that’s more secure and reliable in terms of how we use energy and making it more efficient. There are broadband lines that still need to be going out into every part of the country.

In an unrelated question from a Hawken School student, President Obama reflected on the Cuyahoga River fire of 1969, the result of years of environmental neglect and the spark of an environmental and regulatory movement that has vastly improved water quality.


I think the problem right now is that we live in such a complicated, big, global society that what might be a sensible theory on paper doesn’t always make sense in real life. So you may generally think, as I do, that the market is the greatest source of productivity and job creation and wealth creation and history, but our history tells us that if there’s a company that’s out there making a lot of money but also pouring a bunch of pollution into the water, and it catches on fire -- (laughter) -- and suddenly people can’t fish there anymore, and people are getting sick, that it makes sense for us to have some regulations that say, you know what, you can make your products, you can make a profit, that’s great, but you’re kind of messing things up and so we’re going to say you can’t just dump your pollution in the water.

"Some may think these are just throw-away unscripted comments," said Northeast Ohio Regional Sewer District Chief Executive Officer Julius Ciaccia, who was in attendance. "But they speak to two important issues.

"To prioritize improvements in infrastructure, there needs to be bipartisan acknowledgement that some solutions can't be put off forever. Decisions and investments must be made and they should be made wisely and collaboratively." Support for initiatives like the national Value of Water Coalition demonstrates this.

He continued: "Second, Cleveland knows its history. Any reference to a burning river makes people think Cleveland. But look at where we are today. In a facility like this, the President here, in a city on the rise, hard work can bring about change. Lake Erie is proof of that, and it will take hard work to keep it great."
Posted by Northeast Ohio Regional Sewer District at 10:20 AM