SPORTS: What would happen if Michael Phelps tried swimming in our tanks? 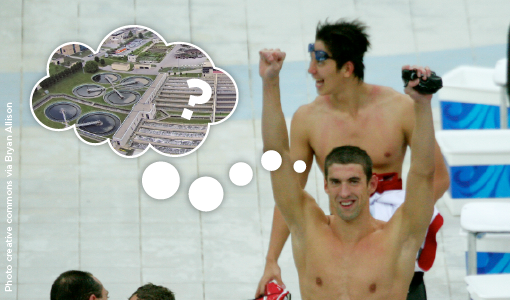 As swimmer Michael Phelps places more gold medals around his neck during these Olympic Games in Rio, we wondered how he'd fare in an environment more unusual than a 50-meter chlorinated pool.

Could Phelps swim in one of these long bubbling channels known as an aeration tank? or perhaps the round in-ground-pool-like tanks nearby?

First, such a thing would not be a good idea, and the topic is not an invitation to try it. But second, the hypothetical does make for interesting discussion regarding the treatment process and the water's physical properties.

We asked our Easterly Wastewater Treatment Plant Assistant Superintendent Dan Smith that question, turning our attention to two tanks along our common tour route: our clarifiers, and our aeration tanks.


What are these tanks for?
The clarifiers slow the incoming wastewater down, which allows heavy particles to sink to the bottom while floating grease is skimmed off the top. The aeration tanks are pumped with oxygen bubbles which sustain good bacteria; the good bacteria consume bad bacteria in what's known as biological treatment.

What would happen if I fell in? or if someone tried swimming in them?
(Author's note: When I initially posed this question to Dan, his first answer was a simple, "Blecch." But he expounded...) If someone fell, it's likely they'd already be close enough to a railing or ledge for support. We do have life rings stationed around our tanks for emergency assistance.

While 12 feet deep, the clarifiers' water is still or very slow moving. If you fell in, you likely could swim to an edge without further issue. Swimming with an Olympian's strength in the murky waters would be gross, but doable.

The aeration tanks are different. Because a person is less buoyant in aerated water, it is much more difficult to tread water.

If Phelps swam vigorously enough, he could remain afloat. But it would not be easy. Again, this is exactly why we have safety precautions like safety harnesses and life rings close by in case danger strikes and a crew member falls in.

And remember, this is wastewater we're talking about. (Which explains Dan's "Blecch" reaction.) Many are criticizing Rio's water quality for athletes and beachgoers, but even that is no comparison to the water making its way through our treatment process.

What would happen once I made it out safely?
All of our treatment plants have emergency showers for the initial decontamination. We then have personal showers for secondary clean-up, and of course, you'd have a hospital visit for follow-up treatment.

Health and safety matter to us, just as they do to Olympic athletes. We'll leave the swimming to the venues better suited for healthy competition.

Posted by Northeast Ohio Regional Sewer District at 8:27 AM