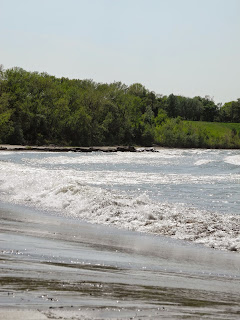 Visitors—particularly children, the elderly and those in ill health—are advised to avoid contact with the water and debris.

“Edgewater is yet another example of why we need to continue to be aggressive in investing in our sewer infrastructure, particularly if want to continue to capitalize on the good work of the Cleveland Metroparks and those who are developing along the lakefront,” said Sewer District Chief Executive Officer Julius Ciaccia recently.

“Otherwise, to ignore the problems, like combined sewer overflows, stormwater run-off, failing septic systems, and illicit connections of sanitary sewage to storm sewers, that plague our local waterways would be irresponsible, and would squander the past investments made to keep our Great Lake great.”

Throughout the mid-1970s, the combined sewer outfall at Edgewater Beach discharged raw sewage into Lake Erie approximately 40 to 50 times per year.

However, because of the Sewer District’s improvements to aging infrastructure, the Edgewater combined sewer overflow discharges have significantly decreased: the overflow, on average, discharges only once every few years.